For those of you who don't know, I work full-time and have a family, so things never move as quickly as I'd like. But I'm spending the day getting packages ready to ship tomorrow. As soon as that's complete, I'll post more items ready for sale and auction. Next up will be pages from Capt. America, Dracula (Dark Horse), and Bob Marley; more comics signed by Stan Lee and Gene; and some sketches.

Still unsold are the cover recreations posted below. Are we pricing these too high?
Posted by CLIFFORD METH at 10:33 AM 1 comment:

I teeter back and forth between discussing Gene’s condition, and to what extent, because it’s deeply personal and often morose. But many of you continue writing to ask and I can’t reply personally to everyone… and Gene said it’s okay to keep you—his fans and friends—up to date. Thus:

Gene was in terrible pain yesterday when I phoned and it was fortunate that I called when I did. He was experiencing debilitating stomach pains and my immediate call to his son (and his son’s immediate call to the facility where Gene stays) resulted, we suspect, in quicker attention. I phoned Gene back and remained on the phone with him until the doctor arrived, which was only ten minutes later—an eternity to Gene, though, who was in genuine agony.

Gene then underwent a para synthesis—a procedure to release the pressure of the fluid that had amassed inside of him as a result of his failing liver. His son, who is by his side, reports that Gene looks much better today, but the swelling has returned to his legs, a condition that his doctor says is likely to continue.

Gene has good days and bad days. He remains highly motivated and wants nothing more than to get back to drawing. “This too will pass,” he said yesterday while in the throes of agony, barely able to breathe let alone speak. This man never abandons hope.

Then this afternoon, “I’m doing a lot better!” Gene said. “Really and truly. They took out two liters of water from my stomach. And the morphine took root and thank God I’ve been fine ever since. I’m going home. I’m not sure when but as soon as I feel like I can manage it, I’m going home.”
Posted by CLIFFORD METH at 3:53 PM 1 comment:

Colan on Kirby and Buscema

Was the asking price too high? Or did you folks miss these? We have two extraordinary cover re-imaginings from the team of Gene Colan and Michael Netzer. We're lowering the starting opening bid to $1000 each. See the images by clicking here.
Posted by CLIFFORD METH at 12:40 AM 2 comments:

Round Three starts this Sunday (May 15). Round Three will include art from Capt. America #601, art from Dracula (Dark Horse), art from Bob Marley Graphic Novel (Marvel), sketches of Iron Man and Dracula, and more comics signed by Gene and Stan Lee.
Posted by CLIFFORD METH at 12:35 AM No comments: 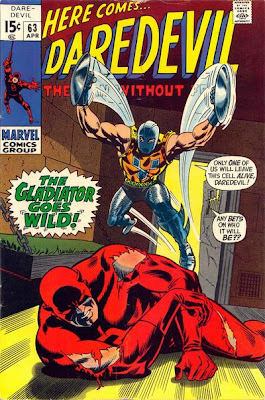 I've just turned in my introduction to the forthcoming Marvel Masterworks: Daredevil Vol. 6, which will collect Daredevil 54-63. It was a chance to spend several hours looking critically at Gene's work on Daredevil, and these issues in particular. Thank you, Jeff Youngquist, Senior Editor at Marvel, for this opportunity.
Posted by CLIFFORD METH at 12:07 AM No comments:

Three hours left to bid on the items listed below...
Posted by CLIFFORD METH at 7:00 PM No comments: 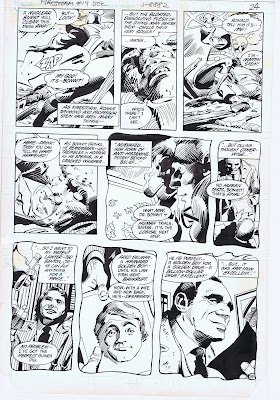 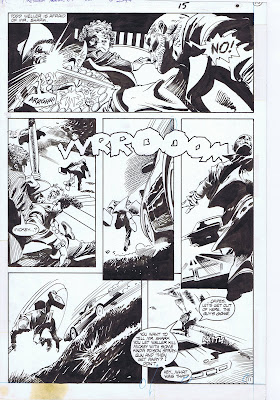 These are the two pages up for bid (see below or click here).

Posted by CLIFFORD METH at 9:11 PM No comments:

Gene sounded better this morning than he has in weeks. He's looking at a top hospice facility and comfortable with this new chapter in his life. No illusions--just positive energy. And he wants to draw! So we're looking at setting up his new room with a drawing board and everything he needs.

Sadly, my own father-in-law entered the hospital this morning with a serious issue, throwing everything into spin. I am unable to work on the auction right now. Please send bids but be patient waiting for updates.
Posted by CLIFFORD METH at 8:29 PM 1 comment:

Bidding on these items ended on May 8 at 10pm -
winners, please contact me

Plots and Misadventures by Stephen Gallagher (hardcover, limited edition from Subterranean Press) signed by Gallagher; only 750 copies issued - no bids :(

The Tomb of Dracula: Book One – signed by Gene – winner (nealst)

"The Simpsons: Sub-Basement of Dracula" script (signed by Marv Wolfman) - current bid $5 (help! who bid this?)
Posted by CLIFFORD METH at 6:41 AM No comments: 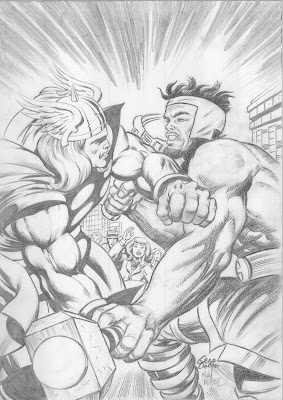 I will be adding items over the next few days, but for now, feast your eyes on two cover recreations, one of THOR #126 (originally rendered by Jack Kirby), the other of SUB-MARINER #8 (by Gene's pal John Buscema) -- both reimagined here by the team of Gene Colan and Michael Netzer (12x18). Starting bid on each: $1200.00 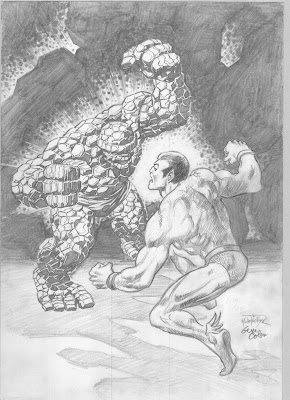 More items will appear later tonight. Deadline for bidding is May 8 at 10 pm EST.

Posted by CLIFFORD METH at 6:20 PM No comments: 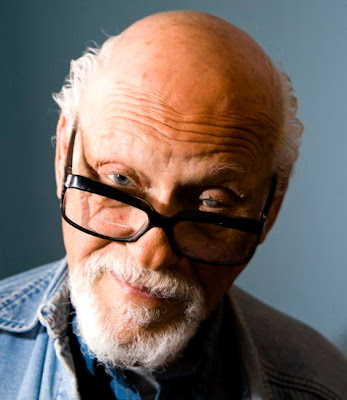 Five hours left to bid on comics and books signed by Gene, original art directly from the master, and, in so doing, to help pay for his medical care. This is *not* a charity event. We don't want donations. But if you ever thought about owning something of Gene's, now is the time to act. Click here.

(photo by Seth Kushner
Posted by CLIFFORD METH at 5:58 PM No comments:

We we halt bidding on these items at 11 pm tonight. Then new items will be posted in Round Two next week. If you are participating in this, thank you! If you're just watching, please spread the word of this auction. Gene is not coming home--he is going into hospice and will not likely be drawing any more, only signing.
Posted by CLIFFORD METH at 11:41 AM No comments:

CLIFFORD METH
Have pen. Will travel.

Minimum order is $100. To purchase art or inquire about commissions contact Cliffmeth@aol.com