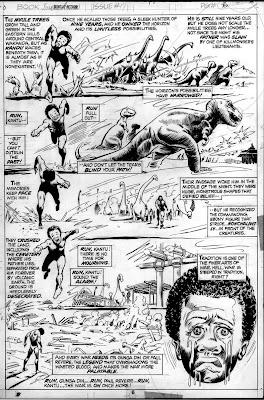 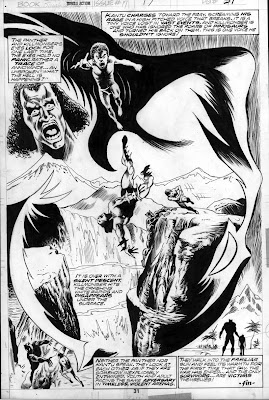 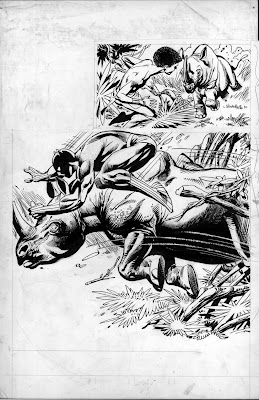 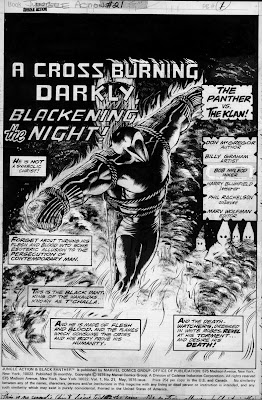 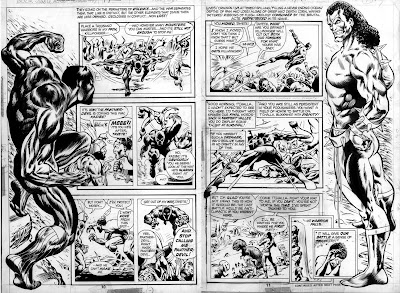 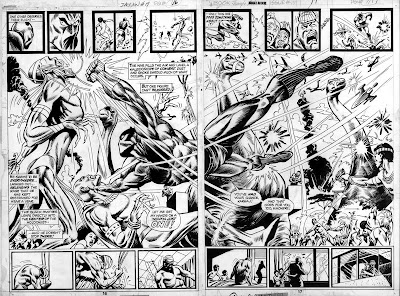 This isn't ths most professional art auction you'll ever attend, but it's one of the sincerest. Don has not sent me images of everything he has for sale (only the ones you see), but he's sent a list (below). So at this stage, if one these strikes your fancy, contact Don at his FaceBook and your bid will be posted here so others can bid against you. When he's ready to sell something, highest bidder will get it. Okay? Don writes that he has the following pages:

The "Sabre and Melissa Siren making love" page from the original Sabre graphic novel, which Don notes was the first American comic sold directly through the comic book stores.

The art from Tom Sutton's version of ALEXANDER RISK, including blue pencils lay-outs with Don's copy placement from unpublished chapters.

Eleven (11) pages (looks to be complete story) by Rich Buckler from Vampire Tales "The Praying Mantis Principle" ("The first Hodiah Twist story," writes Don. "A very popular story. Gene Colan drew the next Hodiah Twist story,and he always referred to it as the first time we ever worked together, totally forgetting he had drawn a KILLRAVEN: SOMETHING WORTH DYING FOR.

"I revamped the series of a guy who sees himself in a SHERLOCK HOLEMESIAN fashion with ALEXANDER RISK, and had him married, which changed everything. Tom Sutton drew the first chapters, and although it was completely written, and once scheduled by Marvel for its Creator Owned Line, came back to me when they folded the idea. Dwayne Turner was supposed to draw it. Another disappointment. I know that story has at least three scenes in it as good as anything I ever wrote, and dealt honestly with abortion in the 1040s."

From Jungle Action #8 - two page of maps (palace and Wakanda)

Five (5) misc. pages from Jungle Action ("These are probably from PANTHER'S RAGE," writes Don. "THE LAST CHAPTER, pages I designed, including the double pager with The Panther and Killmonger, and the FINAL PAGE, inside the Panther's head, with Kantu and Killmonger. I designed those pages, too") including one splash which has been cut up.
Posted by CLIFFORD METH at 5:49 PM

CLIFFORD METH
Have pen. Will travel.

Minimum order is $100. To purchase art or inquire about commissions contact Cliffmeth@aol.com